Walking the public pier along the Holland State Beach allows one to appreciate both an exercise in free speech and the quasi-felonious joys of graffiti expressionism.

I have never been so brave or confident in what I had to say that I was willing to risk a $250 fine and possible jail time to tag a public edifice in order to say it.*

Vandalism is, at the very least, a misdemeanor offense, but what I want to know is…is it art?

And if it is art, what is it saying?

Based on my hour spent cataloging this year’s liberal art tributes on the rusting canvas of the masses, the message depends on the viewer:

If you look hard enough, you can find answers.

Although….you may also be left wondering what the question was.

But, he scrawled his sentiments in a tucked away place on an overhead pipe, so I suspect he’s playing it cool.

Some people put themselves out there, courting ridicule…possibly unaware that a Tinder Date may be using a pseudonym.

Everyone has an opinion…whether that opinion is worth scrawling on a pier support is in the eye of the beholder.

Dreams are apparently dictated with impermanent ink scrawled on a blue-green background and will melt with time and the coming rains.

Lacking the words to express their deeper emotions, some fall back on a classic:

Friends slap high fives (or low ones) wherever they can.

Some HIGH FIVES bury the headline:

OTHER HIGH FIVES come with best wishes from ON HIGH!

Will Jeffrey or Won’t Jeffrey?

Perhaps the message echoes an earlier time—a plea for Peace, Love and Hope symbolized by a badly divided pie chart?

The VEGANS were a bit demanding and psychedelically so:

Perhaps what you take from the message boardwalk is only that which you brought with you?***

One word scrawled among the masses stood out. I was astounded that classics such as Shakespearean language describing a two-week time frame have made it to modern vernacular (even if the spelling hadn’t):

Then, later, during a rare session of live tv watching, I was bombarded by a commercial which dispelled my illusions. (And possibly also my allusions.)

I almost despaired to have lost a belabored delusion of the persistence of language.

But then, after watching King Lear drop bodies at Grand Valley State University, I decided that Fortnite actually is a modern variant of Shakespearean storytelling—if only Shakespeare had lived in the age of the rocket launcher.

GOOGLE FAILED ME. WHEN I TRIED SEARCHING THE TERM ‘SHAKESPEARE’ AND ‘ROCKET LAUNCHER’ I GOT AN ARTICLE FOR THE ROYAL SHAKESPEARE COMPANY LAUNCHING A NEW VEGAN MENU:

I TOLD YOU THOSE VEGANS WERE PUSHY!

It seemed an obvious thing to me that there should be an image of Shakespeare with a rocket launcher…SO I MADE ONE:

Z’WOUNDS…that was a long way to go for a laugh.
Now, back to the boardwalk…

If art is a medium of expression, then I believe those who congregate at the water’s edge to exchange selfies and tag nearby crumbling infrastructure are at least trying to get a message out.

Or, maybe they are all just succumbing to…

But I say, “Let he who is without talent, shut the hell up.”

And let it be what it is.

The need to express ourselves, our souls, may be the most human characteristic.

That we do it in a destructive, transitory medium is even more so.

After digital communication leaps past verbal utterances to an all-emoticon communication system—how will we express nuanced emotions?

The phrase a “picture is worth a thousand words” takes on a scary new meaning when all you have is a demented smiley face to look at.

Until that day, cherish words, however they are conveyed.

Whatever cryptic message they share may be just for you!

Maybe the mystic words will heal what is broken.

Release what is hidden.

Find what is lost! 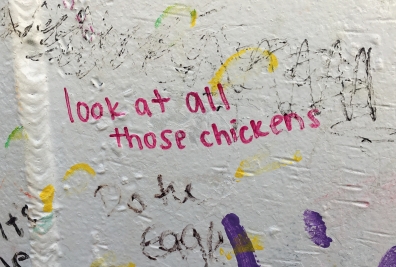 Maybe a body just needs to scream into the void and hope that someone, somewhere, is listening:

*I vandalize the internet from the safety of my blog instead.

**The internet laws have not yet caught up with the violations of free speech rampant in the digital stratospheres. When I become dictator of the universe, trolls will be hunted for sport.

***I suspect I’m stealing this line from Yoda. Or Harry Potter. A writer somewhere is feeling a sharp pang of plagiarism.