I was going to title this 2017 – A Year in the Crapper and include an appropriate photo, but my friends tell me I overshare.

So, here’s my modified letter to the world: 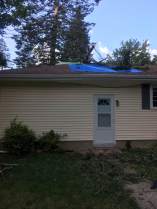 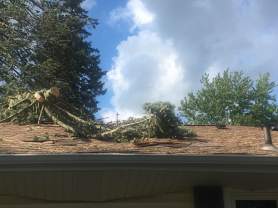 Yeah, yeah. Having a tree drop on your house in a sh*t storm was a pretty big effing clue. But you could just chalk that up to really bad luck and shrug it off. If it weren’t for all those bad juju kinda things that kept happening.

I tried traveling to exotic locations and exploring for fun and adventure. I generally learned there is a diminishing return on happiness. The farther away we got from home, the more likely we were going to need an E.R. trip or an intervention. We are now circling the drain of 2017 and sticking mostly to home as a result.

My son loves to go places and sleep outdoors.

Or so I thought.

Instead, what I found was photographic evidence that my son just likes a variety of places he can write calendars–or, if not writing them, he is contemplating it with a fistful of markers or crayons awaiting his next fix.

My son discovered a love of popcorn. That was a new obsession.

This really was his primary food source in 2017

But despite the happiness campaign the people at Orville Redenbacher are pitching, popcorn can’t fix everything.

Not even calendars can do that.

In most of the photos I took of my son…he was not smiling.

He was there. But he was an unwilling participant in:

If 2017 were a fairytale–it was the Hans-Christian-Andersen-dark-with-a-side-of-maniacal-laughter kind. And it would have opened with this line…

THERE ONCE WAS A HAPPY BOY…whose mother tried to address his recurring rage-outs with a wave of pharmaceutical fixes.

We tried several different combinations of psychiatric panaceas. If a drug caused a side effect, we gave a pill to fix the side effect – or in theory, that’s what it was supposed to do. Instead, it produced yet more side effects that, surprise, surprise, we’d try to address with more medication.

It was the loopiest, saddest, roller coaster of a year you can imagine.

There were the bids for happiness that ended in tears.

Then there was the reality check that bounced. HARD!

Part of me wanted to believe this was a transition year. That turning thirteen and becoming a dreaded teenager was the root of this particular evil. But after several incidents of biting in school this fall, I decided to stop the massively medicated merry-go-round–at least in part.

We backed off the majority of his drug trials. He is back on the two drugs that have the fewest complications and I just deal with side effects that only have him crawling up the walls and not sleeping instead of the combo-platter pharmacopeia backlash that produced jittery anxiety, biting, and head bashing, among other things.

I now take comfort in momentary joys–as rare as a solar eclipse and therefore exponentially more cherished in their singularity.

But when added up in seconds, the joys of 2017 could not outweigh the sorrows.

For every golden day in the sun, there were days that drained like pus from a wound.

In this year, I have watched my happy boy transform in a downward spiral of misery and depression, taking me with him.

Then I had to leave my job to take care of him. Because, once he outgrew his handlers, I was the only one who could get him off the bus.

I left a good place to work for a life of uncertainty and near-poverty that allows me to work from home in the hours that my son is in school.

The only upside to this stress?  I have spent less time developing an ulcer over the toilet tank of a government where The Great Evil and his Cabal of Cackling Soulless Ones are stirring a sh*t stew for the masses to swallow.

I AM DONE WITH YOU.

I am coasting the rest of this year and hope that 2018 has some upside that I just can’t foresee or imagine. But I doubt it.*

*In a traditional end-of-year review, I usually take a light-hearted look at the craziness of my life. 2017 hasn’t been so much crazy-fun as it has been crazy-needs-to-be-committed. I’m not going to pretend otherwise and that’s my gift to you. Some years, all you can give is the honest truth…even if it is wrapped in a craptastic bow.**

**Seriously, though, being sick with cough and congestion this past week may have affected this year’s letter. Perhaps after I finish coughing up a lung, I’ll find my happy place again?

AllWatercolors.com - All watercolors by Frits Ahlefeldt

My watercolour paintings of people, animals and places. And my art experiments in different watercolor techniques

Never let a manuscript do nothing but eat its head off in a drawer.

Inked In
Stop Along The Way

Looking forward...from back here, a journey through the second half

AllWatercolors.com - All watercolors by Frits Ahlefeldt

My watercolour paintings of people, animals and places. And my art experiments in different watercolor techniques

Never let a manuscript do nothing but eat its head off in a drawer.

Inked In
Stop Along The Way

Looking forward...from back here, a journey through the second half